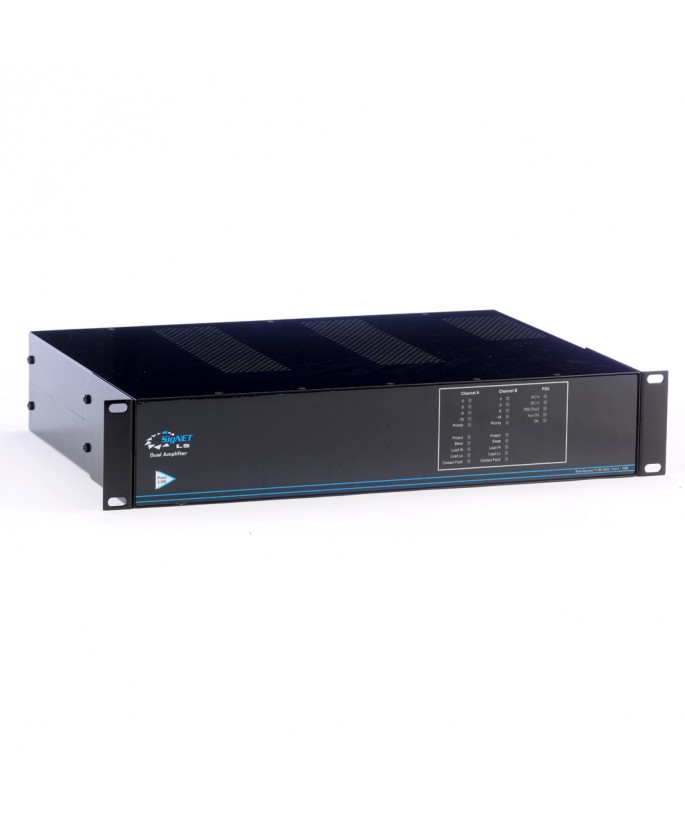 Each module’s status is displayed on the front panel along with an output level bar graph and status indicators.

All sections of the amplifier and charger are constantly monitored for faults or abnormal operation.

The load monitoring system also provides an output to drive a ‘hot swap’ automatic amplifier replacement system, via the HSP port, on failure of the amplifier only. Should a load fail short or open circuit but the amplifier is still OK, the hot swap output will not operate. This means that any loudspeakers that can be driven will operate and leaves the hot swap amplifier available for use on another potential failure.

The output from each module is presented on a three-way socket and is fully floating. The standard output voltages are 50V and 100V, allowing two amplifier modules to be connected in series to give 400W at 100V line.

The Aux. and Main line level inputs are de-balanced and pass via level controllers and an analogue switch into a summing amplifier where they are mixed. If the contact input is asserted (470 ohms to ground) a logic circuit disconnects the aux. input.

The protect circuit disconnects the output transformer when the voltage rails fall below 22 volts, exceed 36 volts, or when a d.c. offset is present on the output rails. The signal then passes through to the output stage, which is a feed-forward current-mode bridge circuit and the output level meter monitors the level at this stage.

The output current is passed through the primary of the output transformer and through a low value output-sensing resistor. The output of the transformer is tapped at 50 and 100 volts. If the 50 volt taps are connected in series the unit provides a single 400 watt output at 100 V line.

A separate feed passes, via the Aux. on LED (this shows that the Aux. power is available on the rear connector) through a 3 amp fuse to the Aux. power connector. With mains voltage operation this unregulated output is at approximately 32 Vd.c. When mains has failed, this output is connected to the battery and therefore operates at battery voltage level.

A 27.2 volt regulator is also taken off this line and used to charge external batteries via a 20 amp fuse. All fuses are accessible by removing a plate on the rear panel.

PSU and amplifier faults are returned into the monitoring circuit from both amplifiers, slugged to prevent false faults being reported externally, and passed to the (normally high) fault outputs on the CAT5 SIP pfourth open collector output is normally set as OK (normally closed) and opens when any fault occurs.